Precious stones of Jaipur and their secrets

Precious stones of Jaipur and their secrets

Jaipur -the pink city- has always been known as the gemstone capital of the world. It is home to magnificent treasures made by the master craftsmen of the region. The city is also famous for being the cradle of the maharajas or Indian kings always adorned with sumptuous jewelry.

Colors of the stones used in our Indian jewelry have a special meaning: let's discover some of the most emblematic stones in our collection of gold-plated silver necklaces, bracelets and earrings. 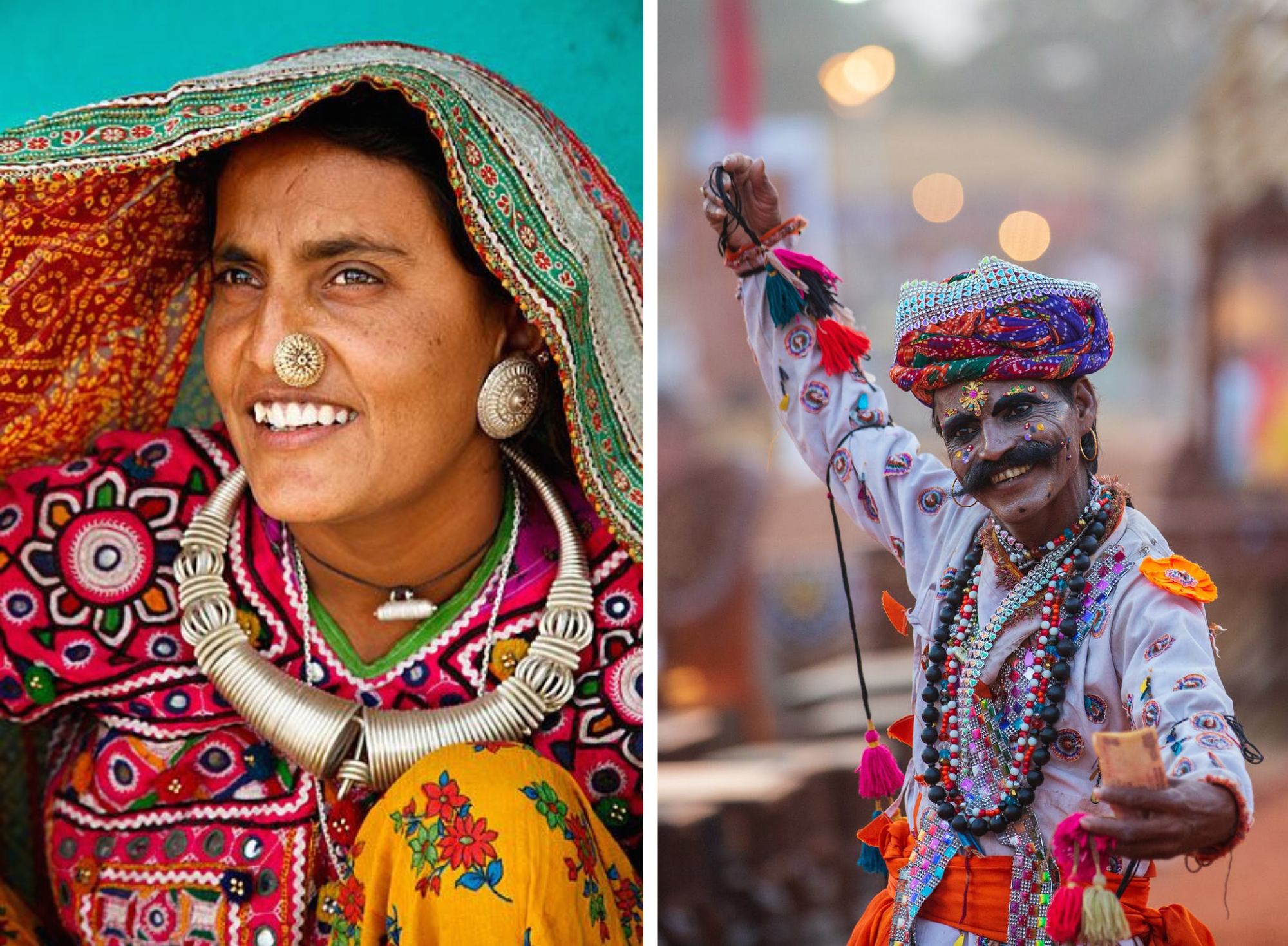 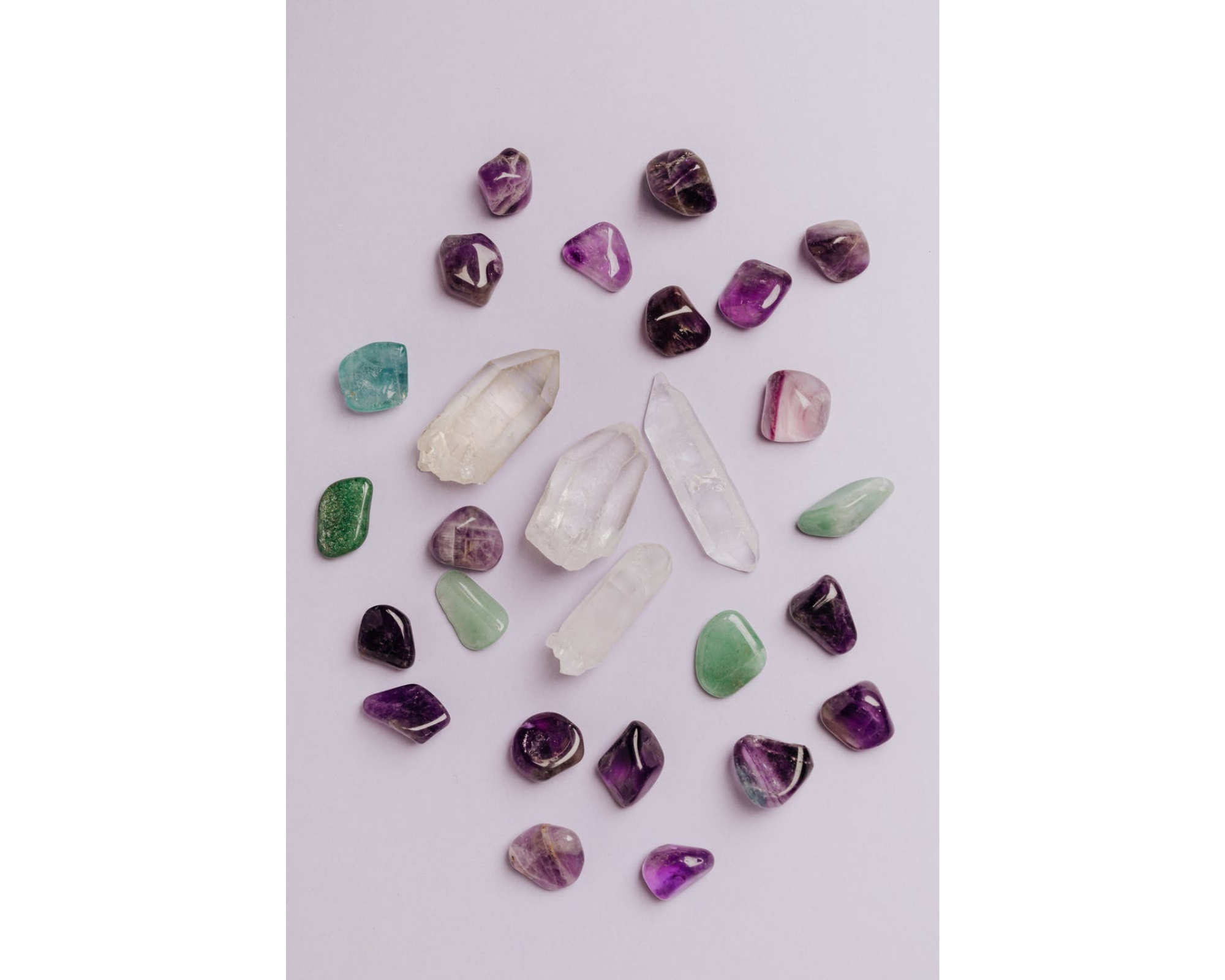 A must in lithotherapy, the Labradorite stone is a real armor against negative vibrations. With its beautiful metallic hues, this stone has many powers and benefits:

- balance of the digestive system

- stimulation of the immune system

- reduction of stress and anxiety

Origin of the name

Discovered in 1770 in the metamorphic or magmatic rocks of the Labrador region, in Canada, it is to this place that Labradorite owes its name. The suffix -ite, from the ancient Greek -itês, means "mineral". Labradorite therefore means Labrador Mineral. Labradorite is also sometimes called rainbow moonstone, or other names such as mauilite, radauite, silicite or spectrolite.

Labradorite's unique color has earned it many legends. The Scandinavian people associate it with the aurora borealis. For them, the stone draws its magnificent reflections in the iridescent clouds.

Certain beliefs make the Labradorite a powerful remedy. When it is reduced to powder, it helps fight against pains and aches. Across the Atlantic, many people are convinced that Labradorite stones contain the spirits of ancestors.

During the second half of the 19th century, Labradorite was used in many styles of jewelry. The jewelers let themselves be inspired by Antiquity and in particular the Egyptian people to create rings, bracelets or necklaces. 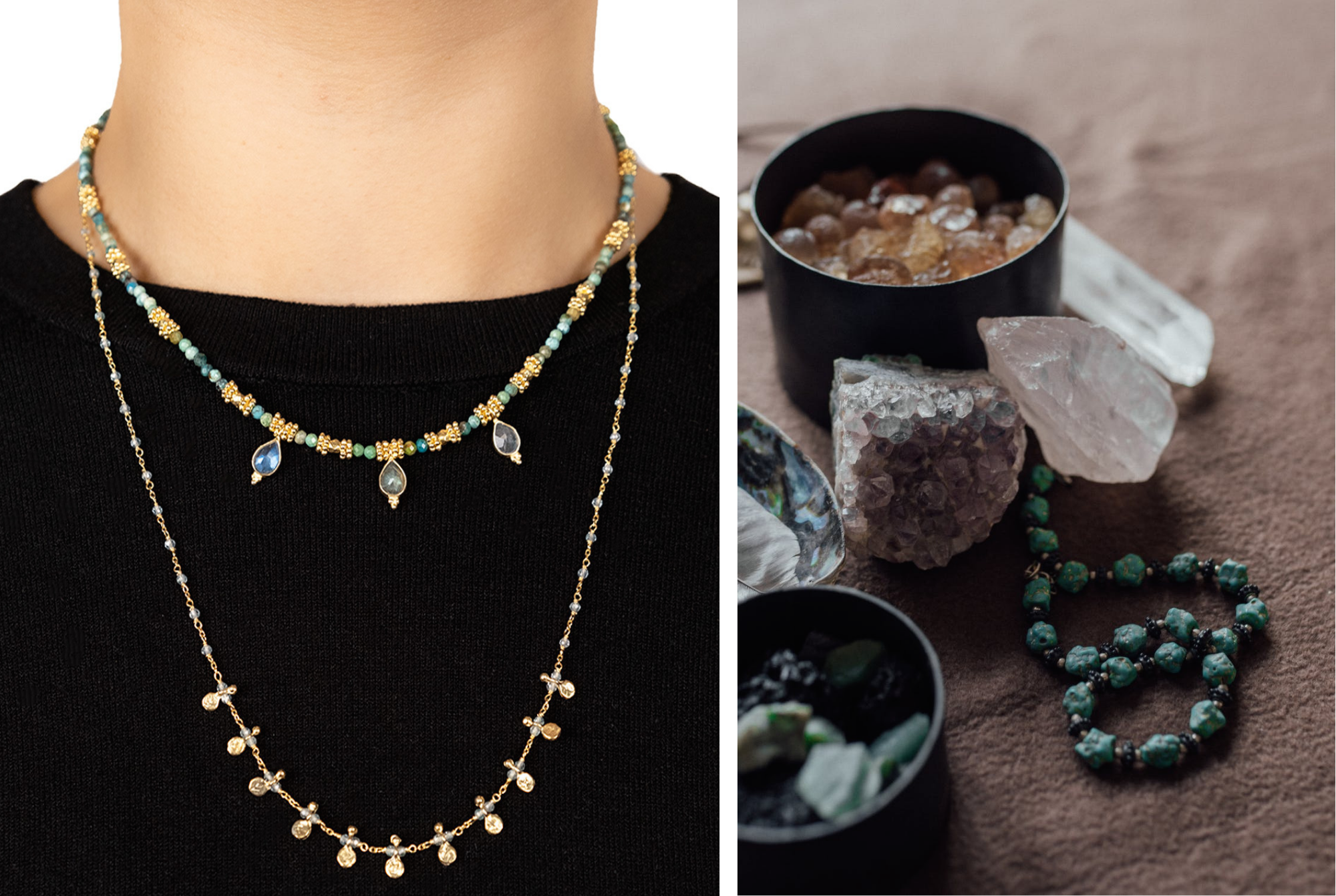 Its shielding effect has a significant effect on our physical condition. Difficulty in digestion causes abdominal pain and discomfort in the intestines. Labradorite soothes the digestive system and its vibrations regulate all the organs of the human body.

A source of dynamism and vitality, Labradorite helps reduce the state of mental or physical tiredness fatigue. The body is more energetic, and finds its vigor. Worn in case of low morale, this stone helps give a boost to the body and mind.

Labradorite stone forms a real bulwark against negative thoughts. Freed from any kind of mental pollution, the mind is clearer and more positive. This benefit is particularly effective during meditation. Labradorite fixes the mind on the essential.

Once freed from the weight of anxiety, the mind is freer to dream. Appreciated by the professionals in the medical field, this stone helps to better understand the people who surround us.

Energetic center of communication and self-expression, the throat chakra is the 5th chakra. To balance it, we must learn to let go and trust ourselves. The Labradorite stone accompanies this letting go. Its blue reflections have a soothing effect.

Labradorite also leads to the opening of the third eye chakra, the 6th chakra. Thoughts, wisdom, emotions and intuition come from this chakra. By placing the stone on the forehead, the mind is freed. Goals become clearer and more accessible. 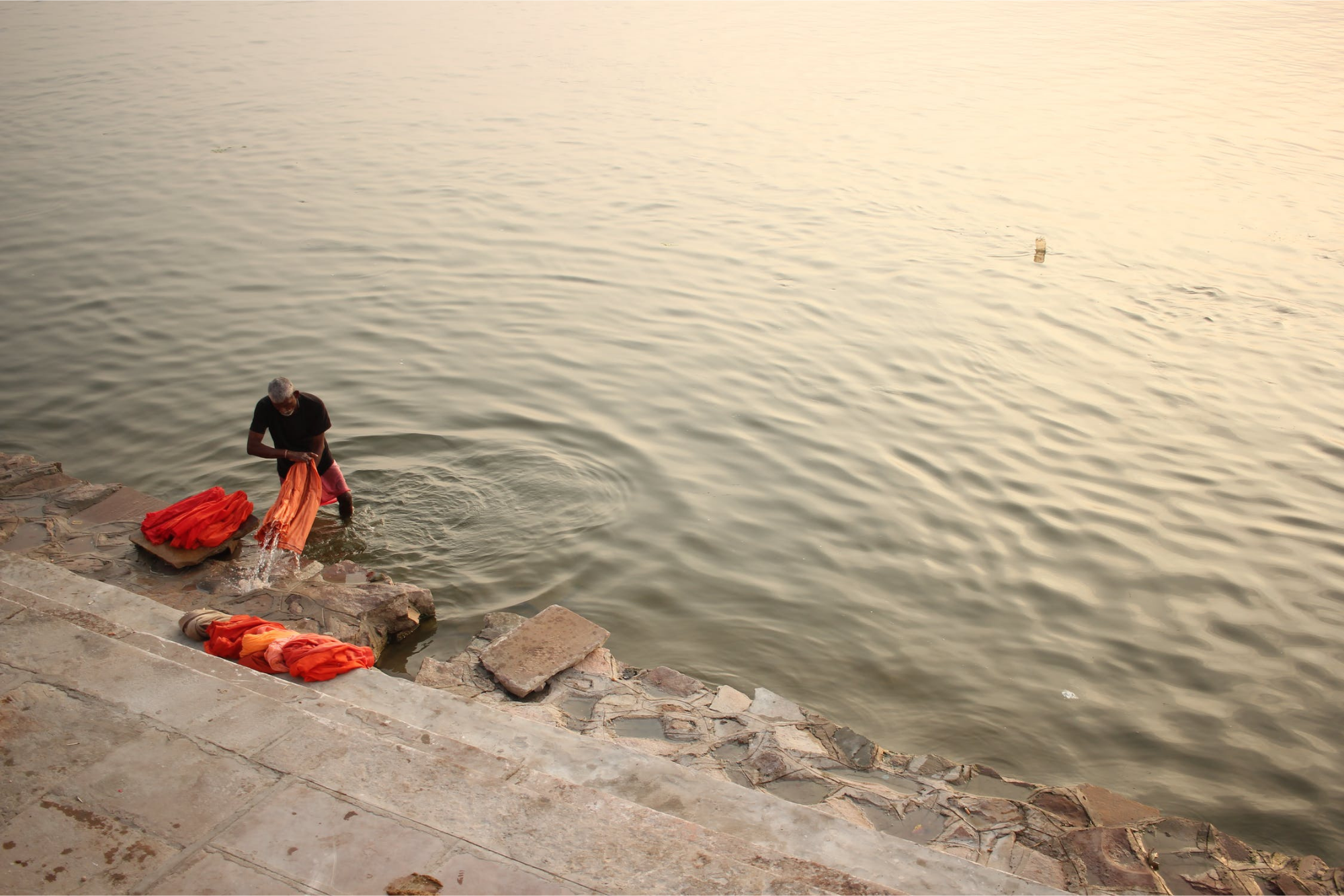 An important symbol of the Islamic religion, it is in the East that we find the oldest mentions of the ruby stone. In the writings of the Koran, the ruby is cited as being closely linked to the creation of man. Most Eastern rulers were adorned with it as a symbol of their great power: the turbans of the maharajas, the tops of the caps of Chinese mandarins, the fastenings of sumptuous garments, jewelry, thrones, and even horse harnesses.

From the 16th century onwards, diamonds began to dethrone rubies among monarchs. It was no longer believed to have incredible powers, and gradually lost its appeal. Doctors and philosophers no longer believed the stories about chimeras, and scientific discoveries dethroned the old beliefs. However, expeditions across the globe left a place of choice for this stone. By bringing back impressive discoveries, explorers ensured its status as a leading gemstone. 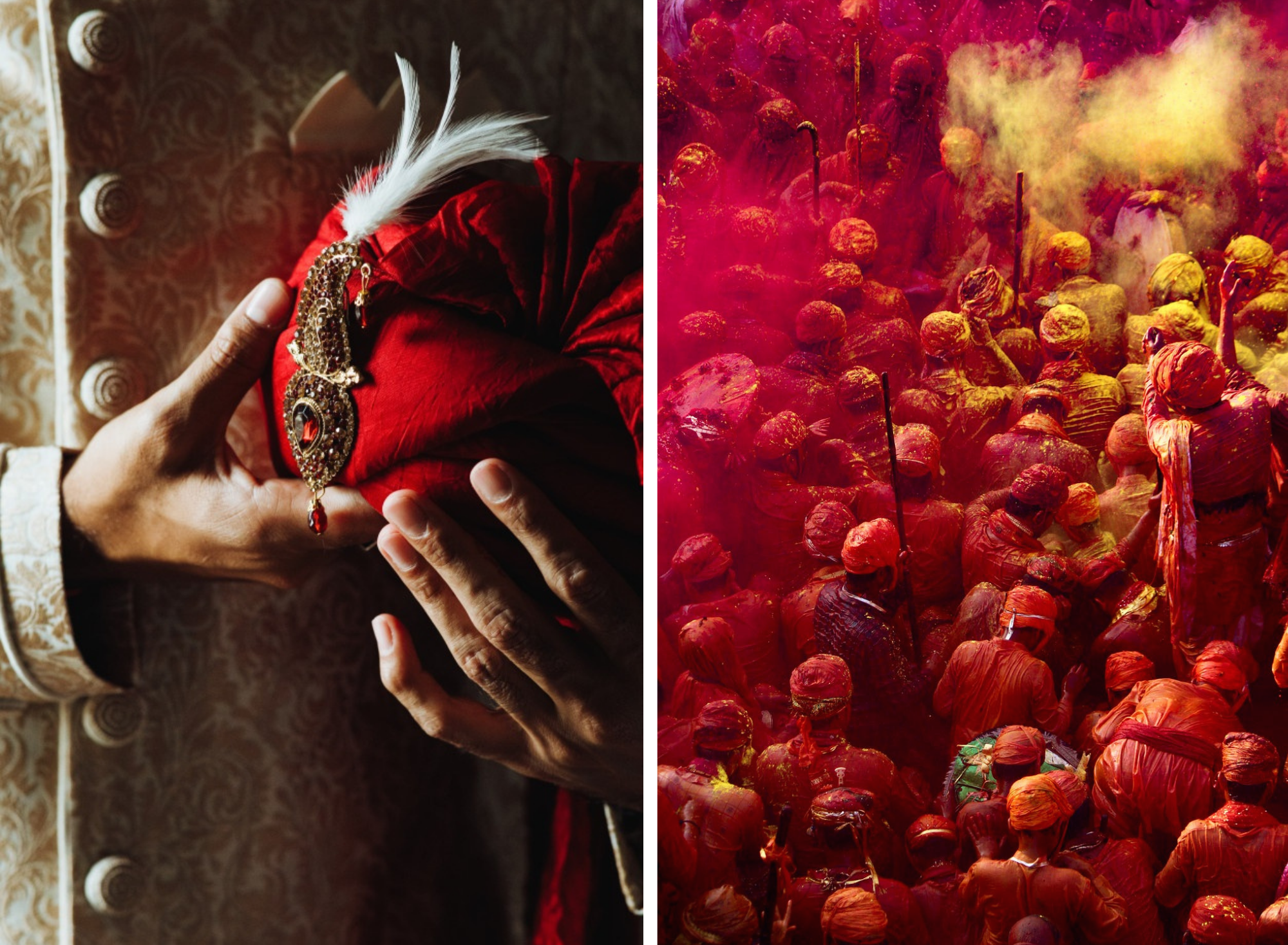 The ruby stone restores joie de vivre and enthusiasm to its wearer, developing self-confidence and perseverance. It also promotes prosperity, regulates hyperactivity and stimulates creativity. Ruby increases all passions, preserves from jealousy and promotes wisdom. It strengthens the will, courage and keeps nightmares away by contributing to positive dreams. 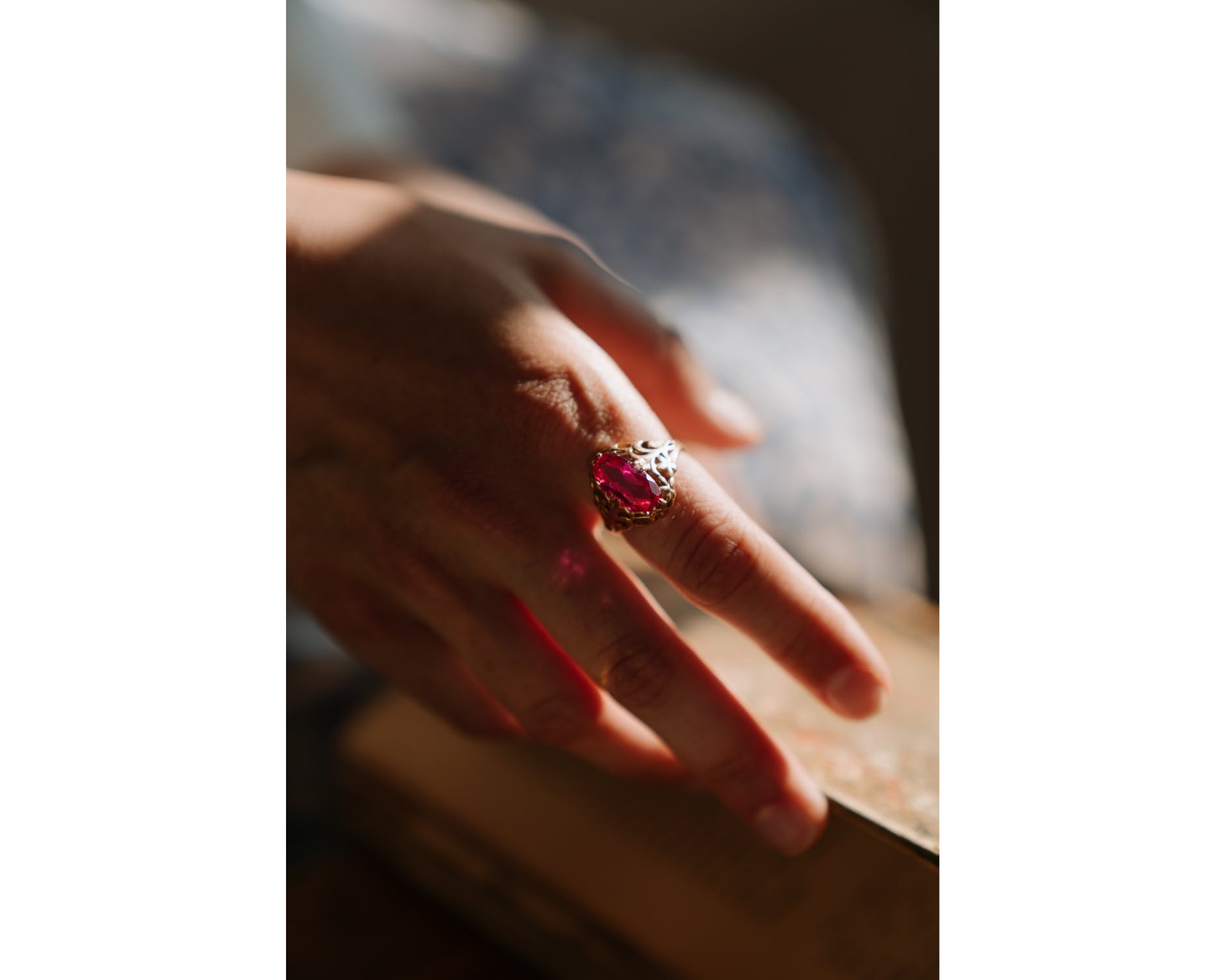 Also known as blue zoïsite, tanzanite is a rare stone with a crystalline luster, whose only deposit is located on Mount Kilimanjaro in Tanzania. Among the most expensive in the world, it is a powerful symbol of spirituality and self-fulfillment.

The name "Tanzanite" comes from the country Tanzania, in reference to the place of its first discovery. Ancient people used to name natural stones in a rudimentary way, mostly according to their colors or physical characteristics.

This stone was discovered in 1954 by the Maasai, a semi-nomadic people of herders and hunters, mainly settled between Kenya and Tanzania. According to legend, it was after a bush fire that ravaged the savannah that a group of Maasai warriors discovered the shiny blue gems on the ground, as a sign of fate.

In reality, tanzanite, originally brown in color, turns deep blue when heated to over 500°C. This is how what they thought was a simple stone became a precious stone.

Tanzanite is a variety of zoïsite stone, with a very particular composition, notably a high vanadium content. This is a chemical element that produces a color transformation when the stone is heated to high temperatures.

It is found in its natural form -blue- on only one place of the globe: Mount Kilimanjaro. This area of high volcanic activity exposes the rocks in the vicinity to significant increases in temperature.

Shortly after its discovery, the famous jewelry brand Tiffany became fascinated by this rare blue stone. The creator of the brand then gave its current name to this stone, in reference to its country of origin. They made the piece famous via their magnificent creations.

Despite its power, tanzanite operates with great delicacy and compassion. It is a very fine stone that stimulates imagination, artistic creativity, writing, memory, but also a sense of humor and repartee!

It is a stone that encourages personal achievement. It brings out the best in us and improves confidence in people who are shy or doubtful of their abilities.

The blue gem is one of the most wonderful stones for raising one's spirit and consciousness to the celestial spheres and working for peace. Tanzanite stimulates extra-sensory perception, intuition and clairvoyance. It is a very valuable aid in difficult times.

One of the main properties of tanzanite is to promote the regeneration of the body by strengthening the connection between different organs at the cellular level.

It would also have beneficial effects on the skin, by making it firmer and more radiant. It fights against skin conditions such as acne, eczema or psoriasis.

Tanzanite is also a very beneficial stone for hearing and vision. 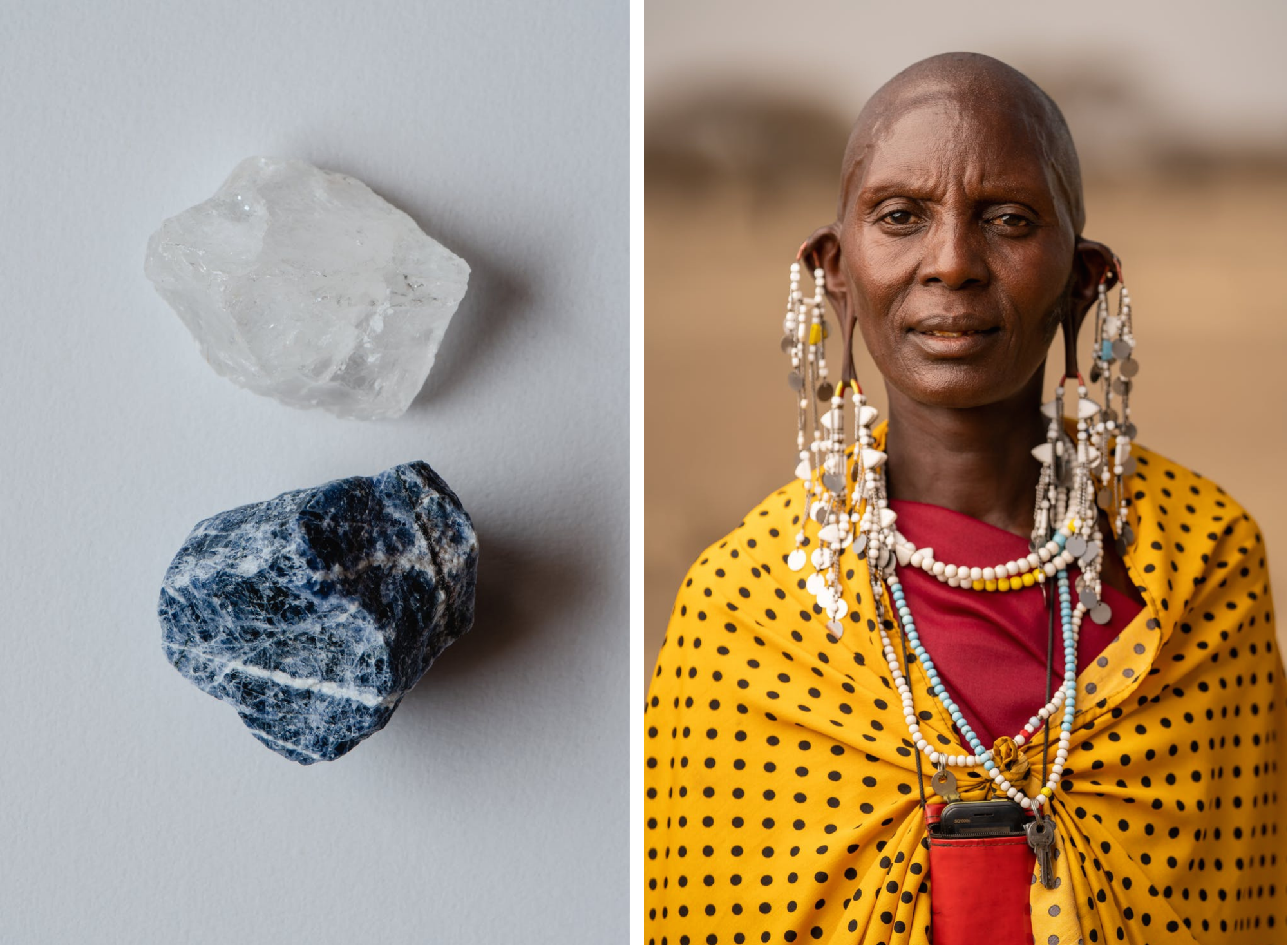 Considered the crystal of love for many centuries, rose quartz is now found all over the world. The beauty of its shades makes this mineral the favorite of jewelers.

Its virtues and benefits are multiple:

The word Quartz comes from the term "quaterz" meaning "bad ore". In the Middle Ages, the name Quartz includes all crystals, regardless of their composition. It was in the 16th century that a German scientist decided that the term Quartz would only refer to rock crystals. A hypothesis explains that Quartz would be a derivative of the German word "gewärz", which means growth. 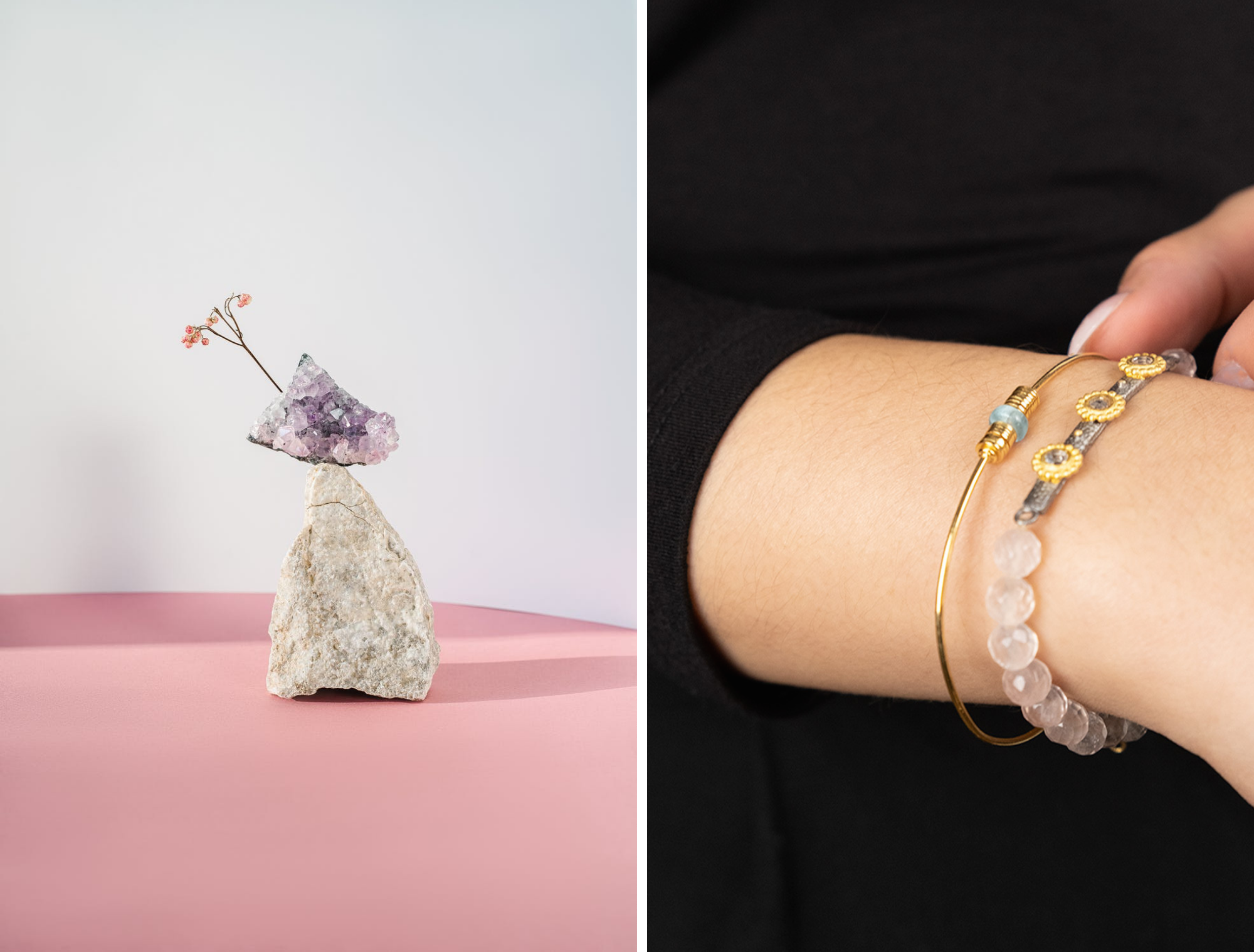 Also called Bohemian ruby, Ancona ruby and sometimes Silesian ruby, for the ancient Romans and Greeks rose quartz came from the gods of love Eros and Amor. The arrival of this mineral on Earth was to give people love and peace. Another legend from Greek mythology says that rose quartz came from Aphrodite. Her beautiful Adonis was attacked by a wild boar and she rushed to save him. While skinning herself in the brambles, her blood mixed with that of her love. This mixture of hemoglobin gave life to rose quartz.

Quartz is mainly formed in magmatic rocks, such as pegmatites. The main deposits of this stone are in India and Sri Lanka. It is also found in Madagascar, the United States and Southwest Africa. But the first country producing rose quartz is Brazil.

The pink color of this stone also has soothing properties. Quartz helps reduce stress and mitigate its harmful effects on the body. It brings inner peace, and our relationships with others are more fluid.

This stone also helps to overcome heartache and anxiety attacks.

Quartz and its unrivaled softness are beneficial to the skin. The stone can even be applied directly to the skin in case of burns. By draining the blood circulation, quartz helps to reduce the effects of small hematomas. It is also a stone known to reduce the appearance of wrinkles.

This mineral also regulates endocrine disorders. Thanks to its moderating action on the blood pressure, it strengthens the heart and accompanies the elimination of toxins. These benefits also help to reduce the effects of stress-related ulcers.

Quartz preserves the lungs and thus facilitates a calm and soothing breathing. Its energies will promote the proper functioning of the respiratory system. It also reduces migraines.

The heart chakra -located between the two shoulder blades at the sternum- is the fourth chakra. It is the energy center at the origin of love and joy. Stone of love and attachment, quartz helps to heal after a breakup, maintains self-esteem and allows us to find the emotional and affective balance in our life. 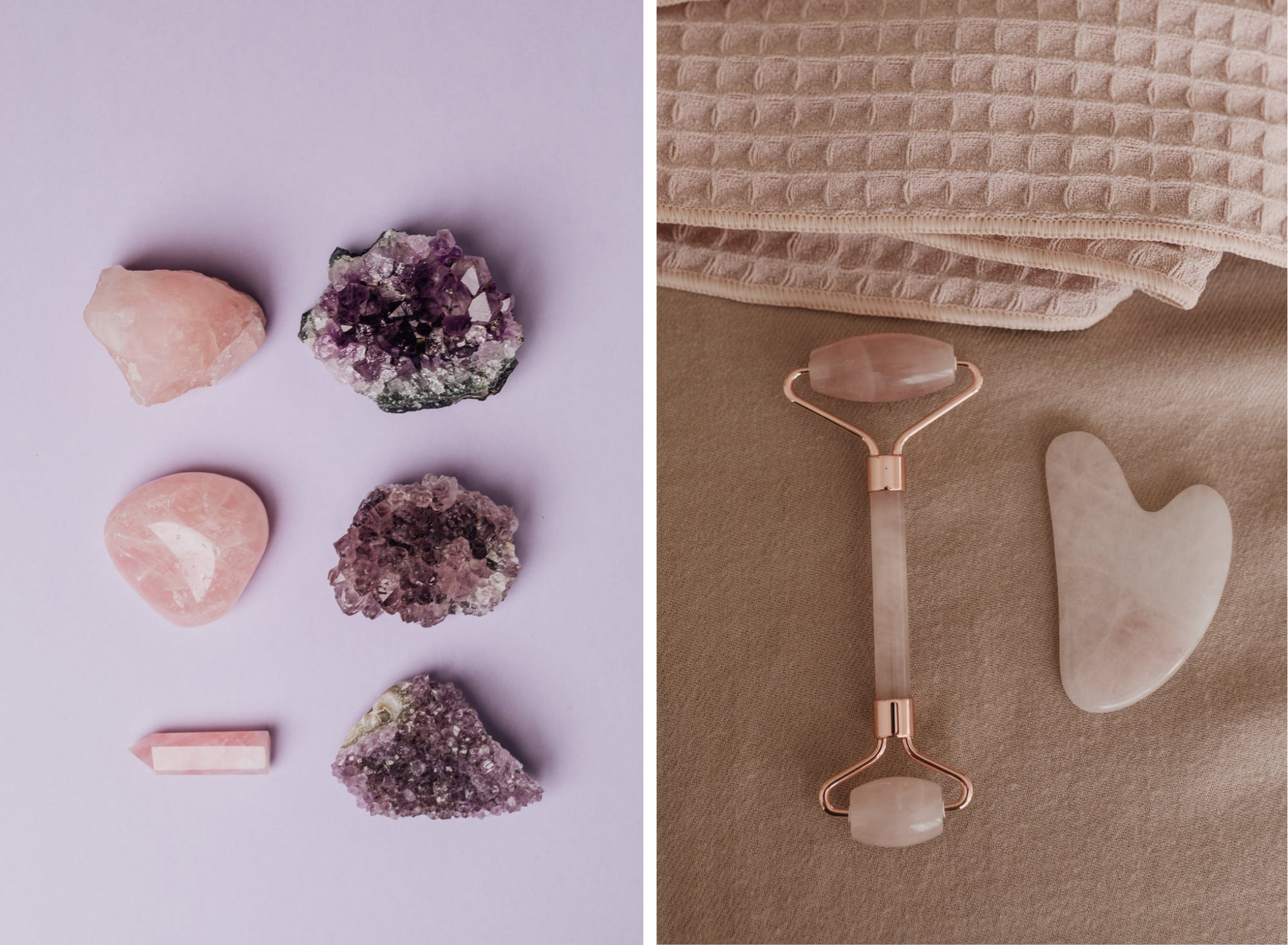