The art of natural dyeing in India

The art of natural dyeing in India

India’s rich natural resources used in textiles are unrivalled. Its varied topography and climate provide an impressive variety of plant fibres and natural dyes for use by cultivators, weavers, dyers, printers and embroiderers. Each region developed its own expertise based on locally available resources such as the golden silks of Assam, the fine cottons of Bengal, or the red dyes of south-east India. 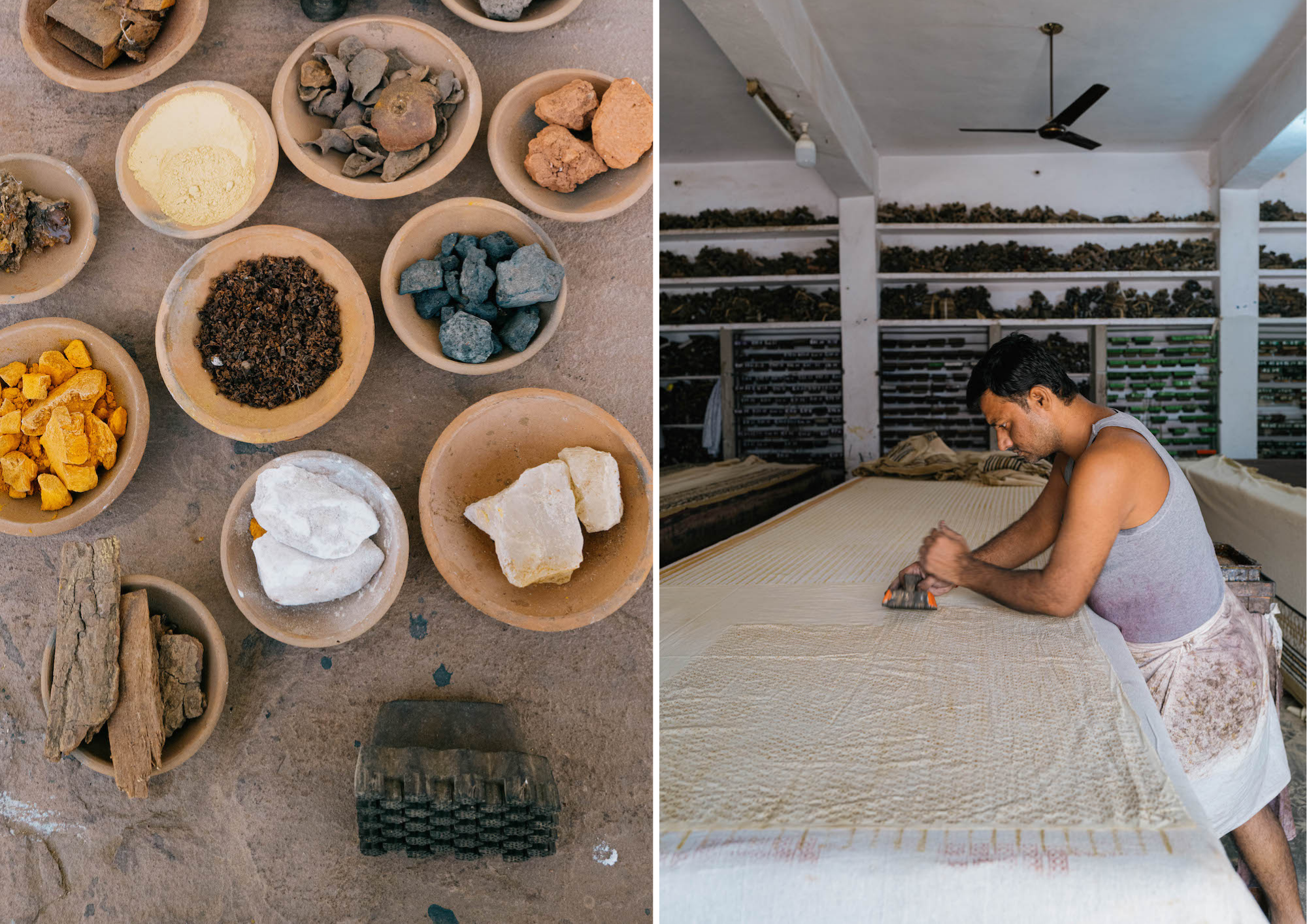 The Jamini ‘Bagru’ collection of home decoration pieces uses the traditional art of hand block printing by the Chhipa community who have been masters of this craft since hundreds of years. Natural dyes have been used to create this range of interior decoration pieces and hand-crafted accessories.

The Bagru collection is eco-friendly and includes pieces for the bedroom, living room and the dining room. The base fabric is treated with Fuller’s earth (multani mitti), soaked it in turmeric (haldi), and hand stamped with beautifully sculpted wooden blocks using natural dyes in earth tones. 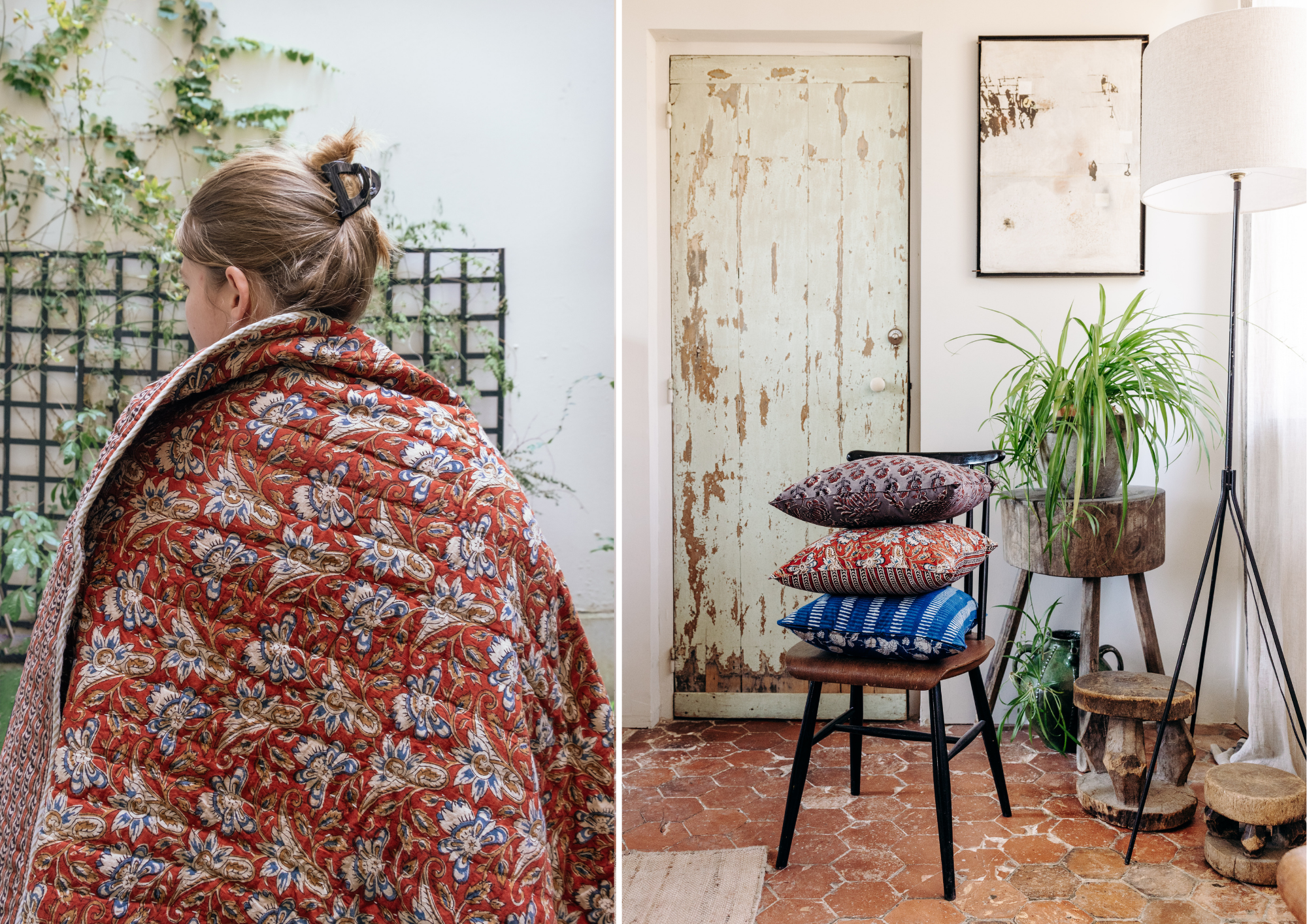 Color dyeing is an integral part of the textile manufacturing process in the Indian subcontinent.

Natural dyes have been traditionally been extracted from organic and mineral sources –plant matter as well as the earth , and applied onto yarn or fabric. Dyeing methods vary from region to region.

Indigo is a dye that is probably the most ancient color cultivated along the banks of the Indus River. The word Indigo comes from the Greek word Indikon - blue dye from India, referenced in the notes of Pliny the Elder, a Roman naturalist and philosopher. 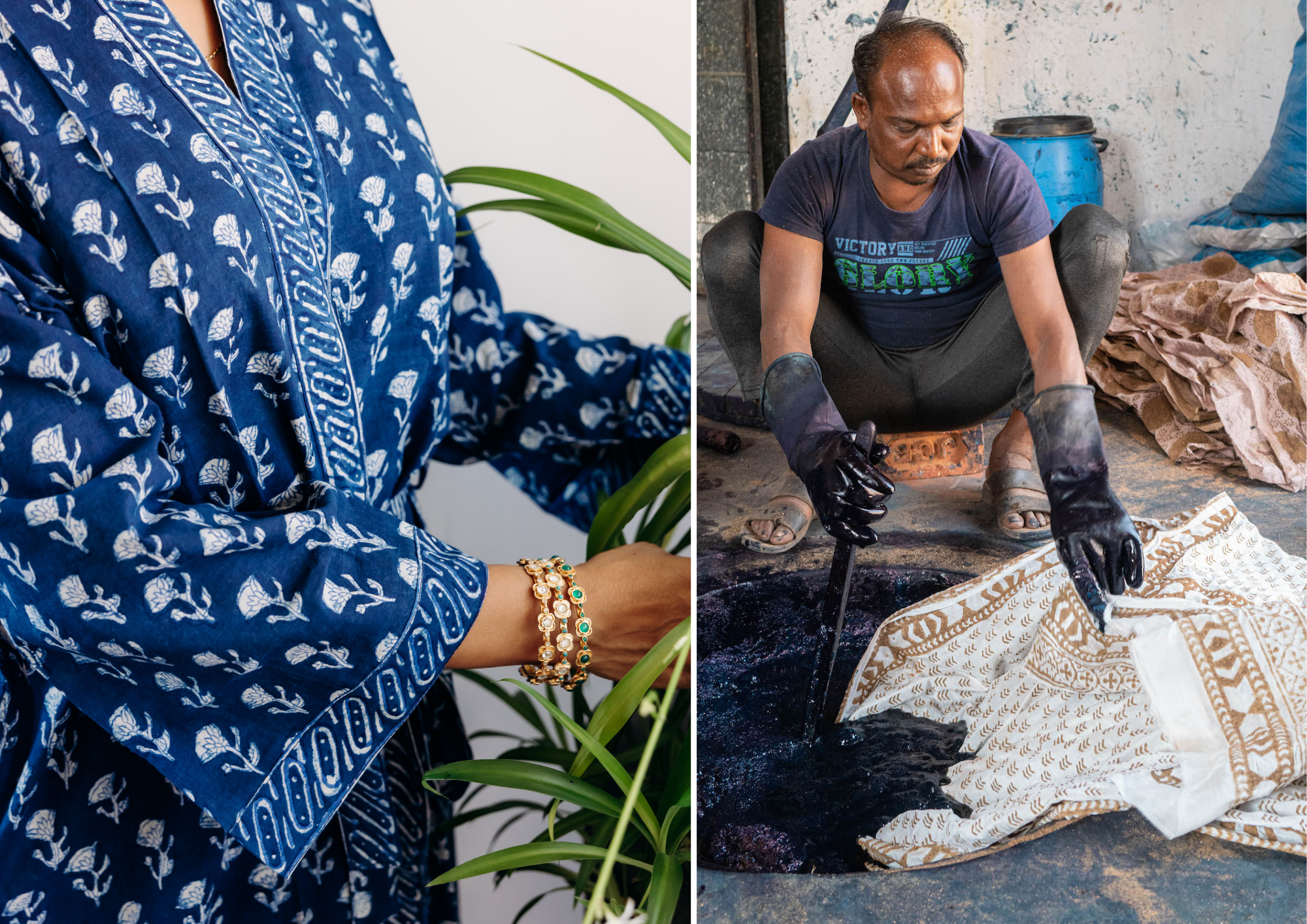 The production and usage of the indigo dye have been associated with the Kutch region and the Khatri community of textile artisans. Indigo in Kutch area has always been a source of pride to the people who wear it. The cooling property of that deep blue is irresistible under the harsh sun of the Rann of Kutch desert, and the Khatris believe that Indigo serves as a natural antiseptic.

Large maats (terracotta urns placed in the ground) are filled with crushed leaves, lime, and salt, and left to ferment for a month. Indigo dust sediments at the bottom of these maats. The sediments are filtered and crushed to form a mixture. The perfect pH for Indigo dye is 11-12 and so lime or jaggery are added to balance the pH if and when required.

This thick mixture is tied in cotton sacks and kept under the ground where the hot sand sucks away excess water for about two months, leaving behind an Indigo cake. The Indigo cake is pounded on a stone slab with water and Acacia torta seeds /henna leaves/jaggery/date palm is added until it becomes an even, yellowish-green slurry. This is stored in underground maat to maintain the right temperature. 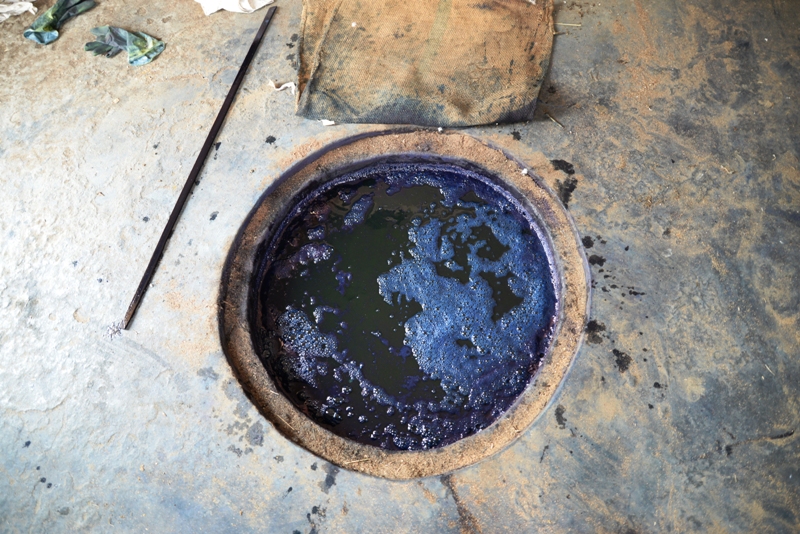 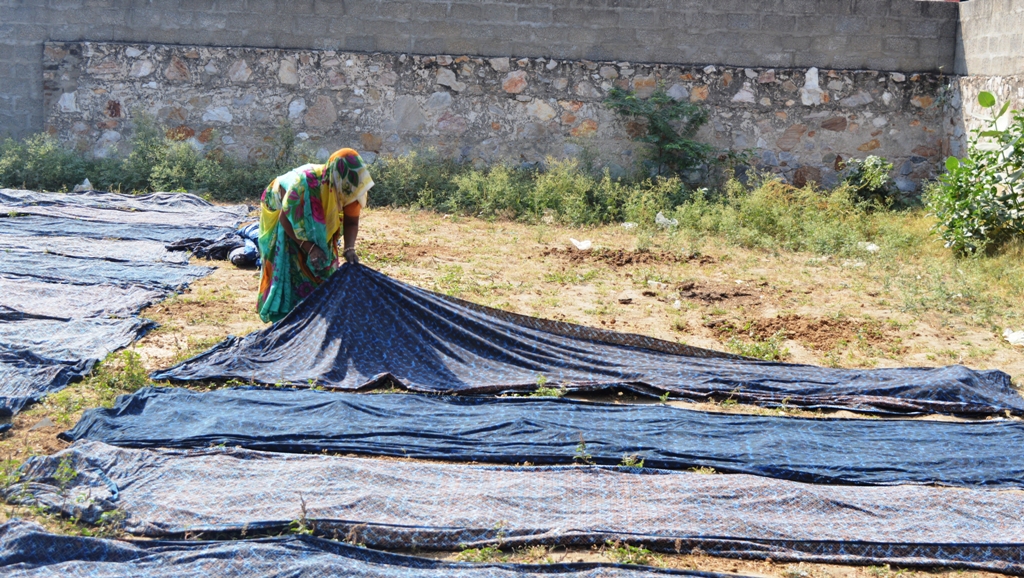 Not all the blues in India are indigo. In the north-eastern states of Assam and Nagaland, a leafy plant known in English as Assam Indigo, in Latin as Strobilanthes cusea, in Assamese rum and in Naga osak yields a range of dark and light blues, depending partly on how shady or sunny a spot the plant grew in 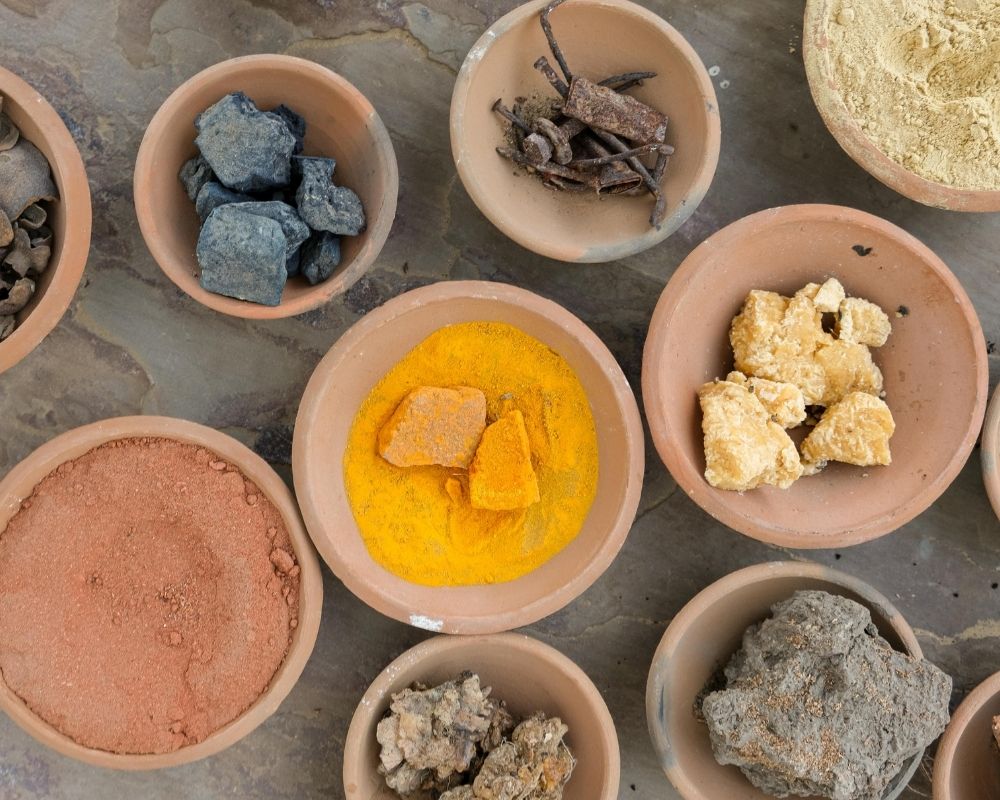 Natural dyes are also used to achieve warm red shades. Red dyes are as quintessentially Indian as indigo, and often have auspicious associations with marriage and fertility. The world-renowned chintzes which were exported to Europe from the 17th century onwards owed their desirability to their fast, bright blues and reds, produced by indigo and chay-root, a plant that is native to coastal South-East India (and the northern tip of Sri Lanka) which gives a range of beautiful reds and pinks on cotton when combined with an alum mordant. 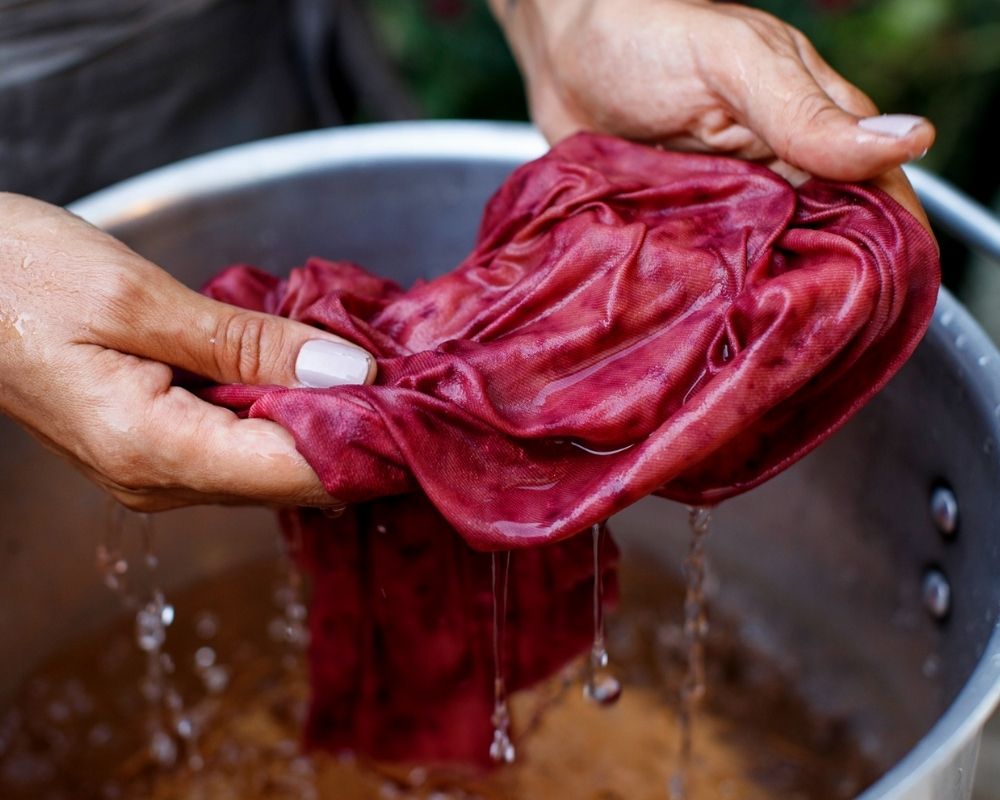 Traces of madder dyed textiles were found at the Mohenjo-Daro excavation site, placing the use of madder as a dye as early as 1100 BC. Trade documents prove that Kutch was exporting dyed fabric in the 1600s to other parts of the globe.

Reds come from the Rubiaceae botanical family, roots of Manjistha (Rubia cordifolia or Indian Madder), the root bark of the Aal tree (Morinda citrifolia L. or Indian Mulberry) and from Rubia tinctorum L. which has its origins in West Asia and Europe.

Perhaps the most beautiful of the Indian reds is produced by lac, although the process of extracting it is rather complicated: it comes from the crushed bodies, eggs and larvae of female lac insects which settle in large masses on the branches of certain trees, especially in eastern India and Assam. Used on silk, it produces a pinkish-red when used on its own and a brilliant, deeper red when used with a mordant

Many of the antique block printed and Batik cloth pieces found in homes across Kutch were generally made using black and red. Black is less prone to running and fading compared to other natural colors. The earliest black shade was achieved by dipping a cloth into indigo over and over again.

Khatris can make many kinds of black - a jet black, a reddish black and a dark chocolate reddish black. Jet black is made by cooking the rusted iron in combination with water and jaggery by the sun. The reddish-black is achieved by using a reddish mitti (mud) that is rich in iron content. 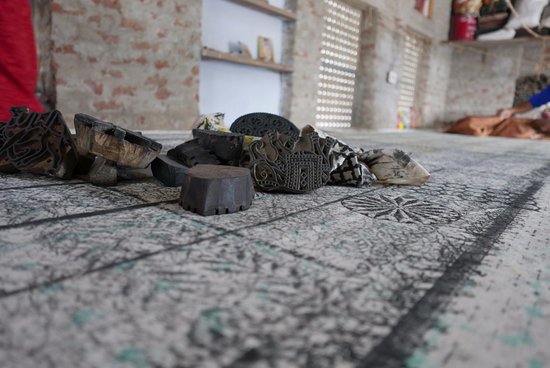 Many of the antique block printed and Batik cloth pieces found in homes across Kutch were generally made using black and red. Black is less prone to running and fading compared to other natural colors. The earliest black shade was achieved by dipping a cloth into indigo over and over again. Khatris can make many kinds of black - a jet black, a reddish black and a dark chocolate reddish black. Jet black is made by cooking the rusted iron in combination with water and jaggery by the sun. The reddish-black is achieved by using a reddish mitti (mud) that is rich in iron content.

A few other colors are achieved from natural sources and plants as well.

The fabric is first dyed in Indigo and then boiled for two hours with pomegranate peels. Then a solution containing Haldi (turmeric powder) is sprayed onto the fabric. The cloth is then dyed in a water-based, alum solution. This results in the color transforming from blue to green. 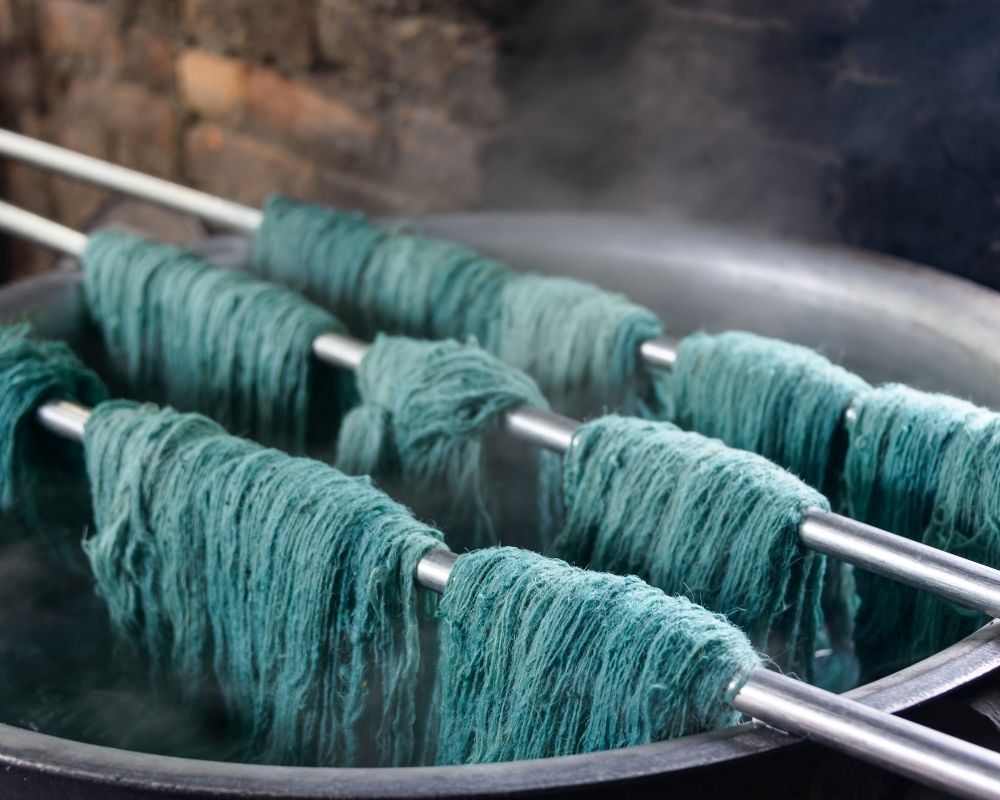 A combination of black dye mixed with tamarind seed powder is used to achieve an ash grey. 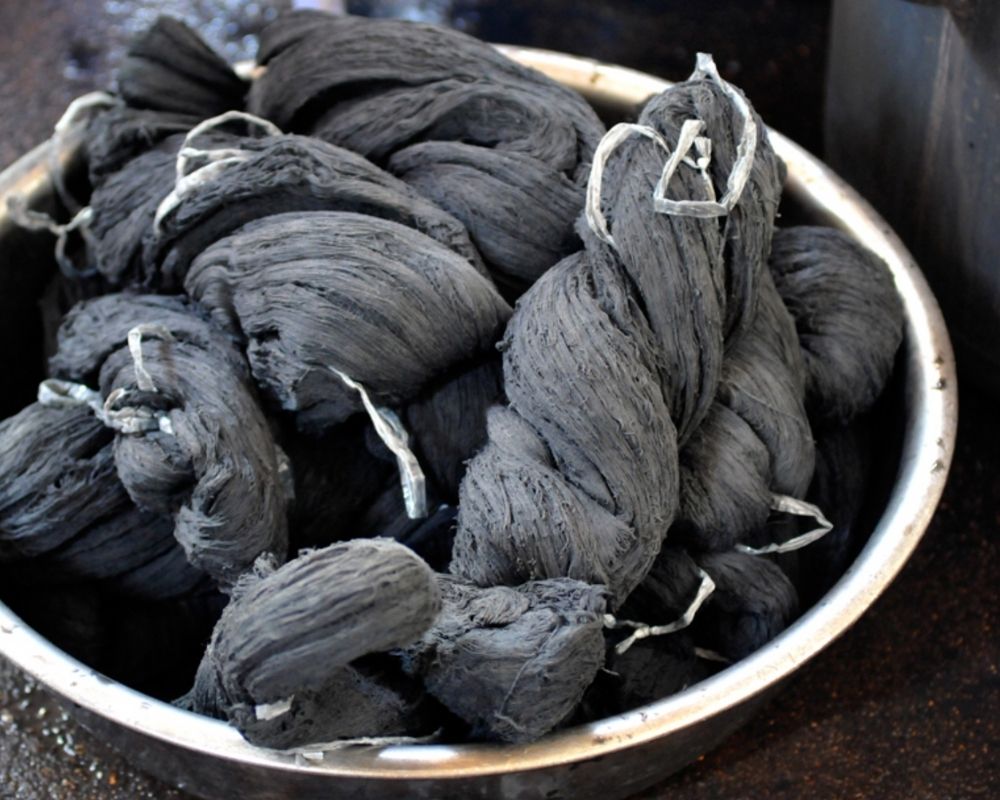 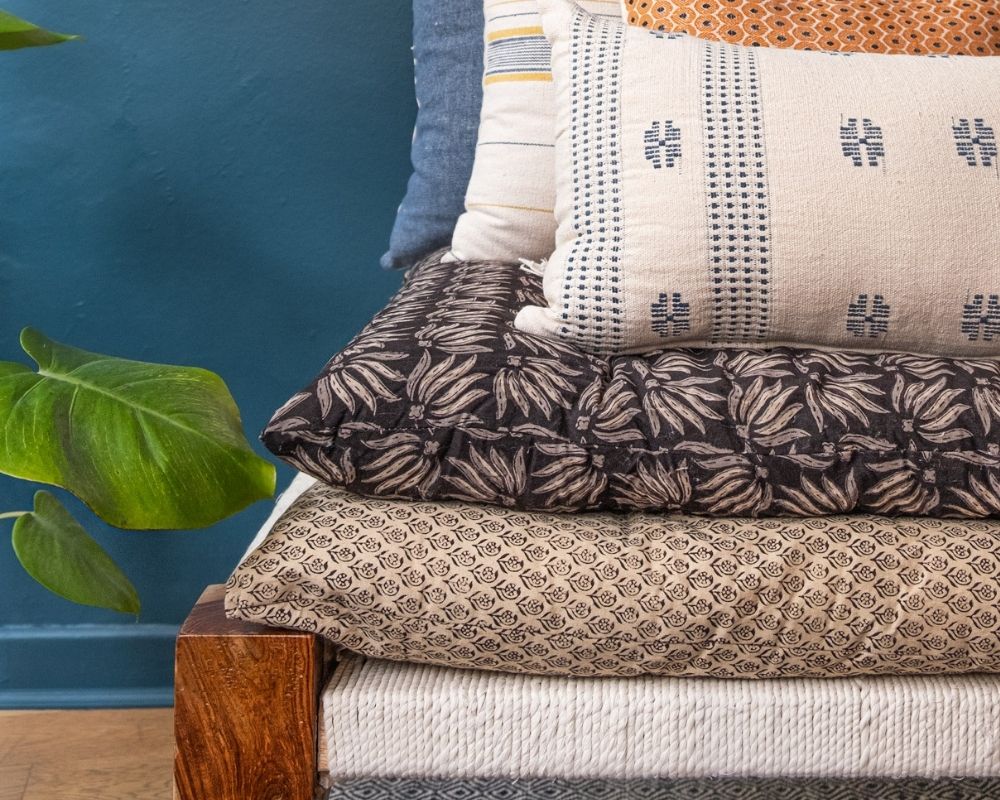 Also used are Anar ki Chaal (pomegranate peels), boiled in water, strained and kept overnight. The water is then sprayed onto the cloth. After it dries, turmeric water is sprayed on the cloth in a similar manner. The cloth is then soaked in alum water to help fix the color on the fabric before finally being rinsed in fresh water a few times. 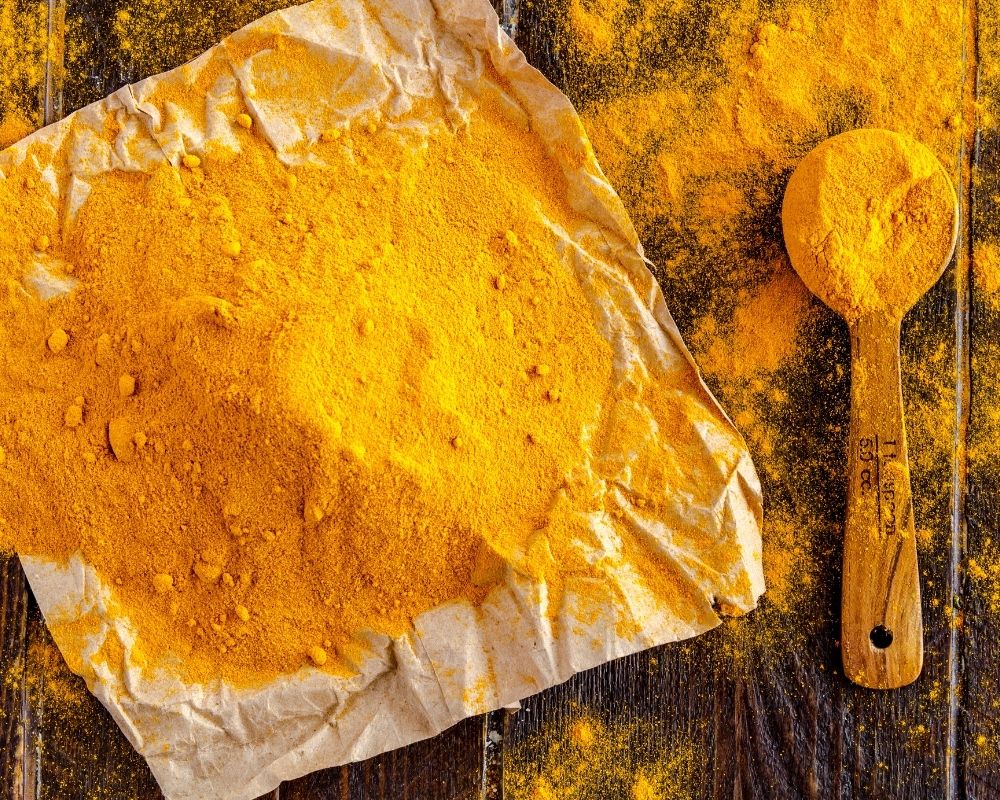 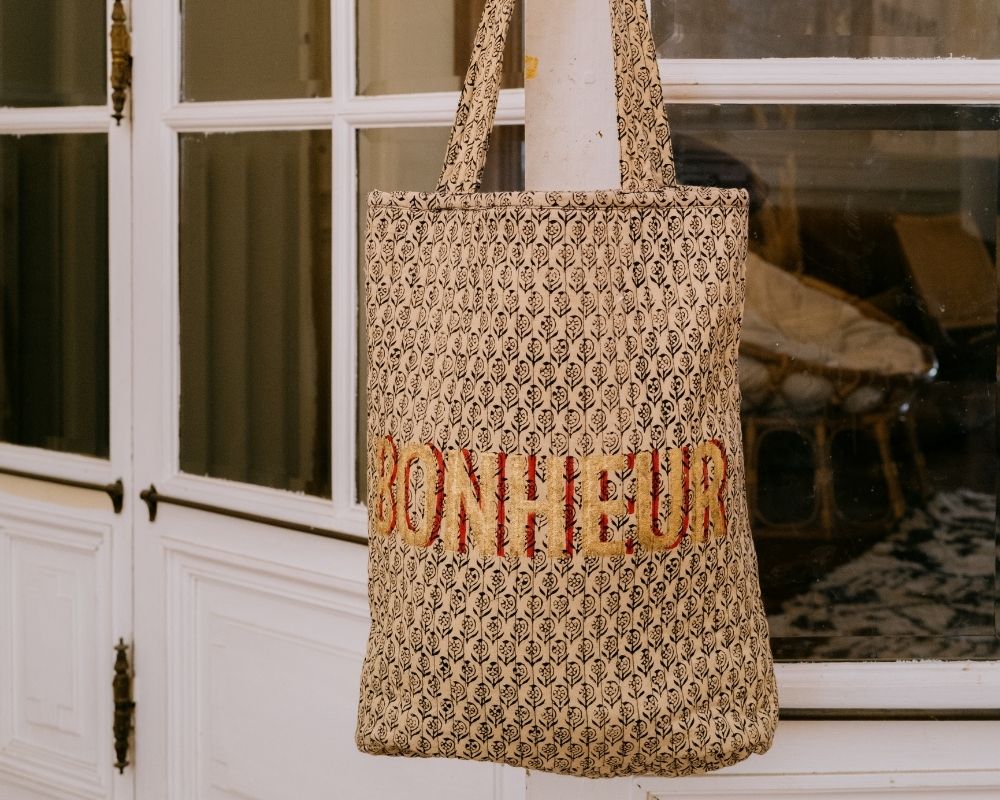 Fixing the color is the great challenge of dyeing cloth. Indian dyers’ use of mordants was key to their expertise, which was unrivalled until the invention of chemical dyes in the 19th century. It is the wealth and mastery of bright and lasting natural dyes that perhaps best distinguishes India’s textile heritage.

Alum, known as Phitkari in Hindi and Phatakdi in Gujarati is found as a mineral in the ground and is used as a mordant in the dyeing process. The darkness or lightness of the mineral affects the color of the dyed cloth. Pliny the Elder, one of the earliest scholars who documented natural dyestuffs, called it alumen, describing it as “a sort of brine which exudes from the earth