The Jamini trip - back to where it all began

The Jamini trip - back to where it all began

Two years ago, Jamini opened their first store on Rue du Château d’Eau, the hip neighborhood of the 10th arrondissement, familiar to some degree with the colors and smells of India. To celebrate this very special occasion, Usha Bora, the founder of the brand invited 2 bloggers along with a photographer and artistic director to discover the places and people that inspire and nourish her imagination. Direction : Delhi and Assam, in North East India, to the heart of the continent where Jamini was born.

The team of 5 intrepid travelers included Usha, Ophélie, founder of the blog Ophélie’s Kitchen Book, Amélia, the 2nd blogger and co founder of the lifestyle blog Nymphea’s Factory, Alexandra Perrin, artistic director and designer of the new Jamini website, and Sophie Denux, photographer and publisher of French magazine Toc Toc Toc. The 5 lovely ladies started their journey with a stop in Delhi, a city that is close to Usha’s heart, where she spent a few years in high school and university, and is home to a large part of her family. Delhi, with her streets full of multicolored saris, parks from another era, and chaotic mayhem is the production hub of Usha’s collection.

First stop: Shahpur Jat. Literally the "royal city of the Jats" , where, 900 years ago, prospered the Dagar farmers, is now a trendy spot for designers and artistic people. The old world charm of the neighborhood is still intact and embroidery artists and hand dyeing ateliers create a colorful maze in this charming enclave. After this introduction to vibrant Delhi, the team discovered the peaceful mausoleum of the Mughal emperor Humayun. Humayun’s tomb is a marvel of Mughal architecture, and inspired the construction of the Taj Mahal. This neighborhood is clearly the founder’s favorite haunt in Delhi. Her family lives around the area and the spot holds wonderful memories of evening Chai under thundering monsoon rains and early morning bird song in the heart of India’s chaotic capital. A trip to the Lodi garden followed the day after. This garden is a peaceful oasis in the centre of the city and Usha loves her early morning jogs surrounded by the ageless monuments that lace the park and its lush vegetation

Another crazy day followed, with a visit to the Jama Masjid, the imposing mosque made of red sandstone, in the historic quarter of Old Delhi. The team headed towards this noisy wholesale market with the most incredible treasure trove of laces, buttons, pompoms and every kind of accessory one can dream of ! Usha uses precious details and trademark pompoms that are often finds from chaotic trips to Kinari Bazar in this neighborhood. A visit to Delhi would not be complete without trying some excellent food cooked by Usha’s gourmet family, and the team was lucky to get a demonstration of Indian vegan cooking by Usha’s aunt herself. 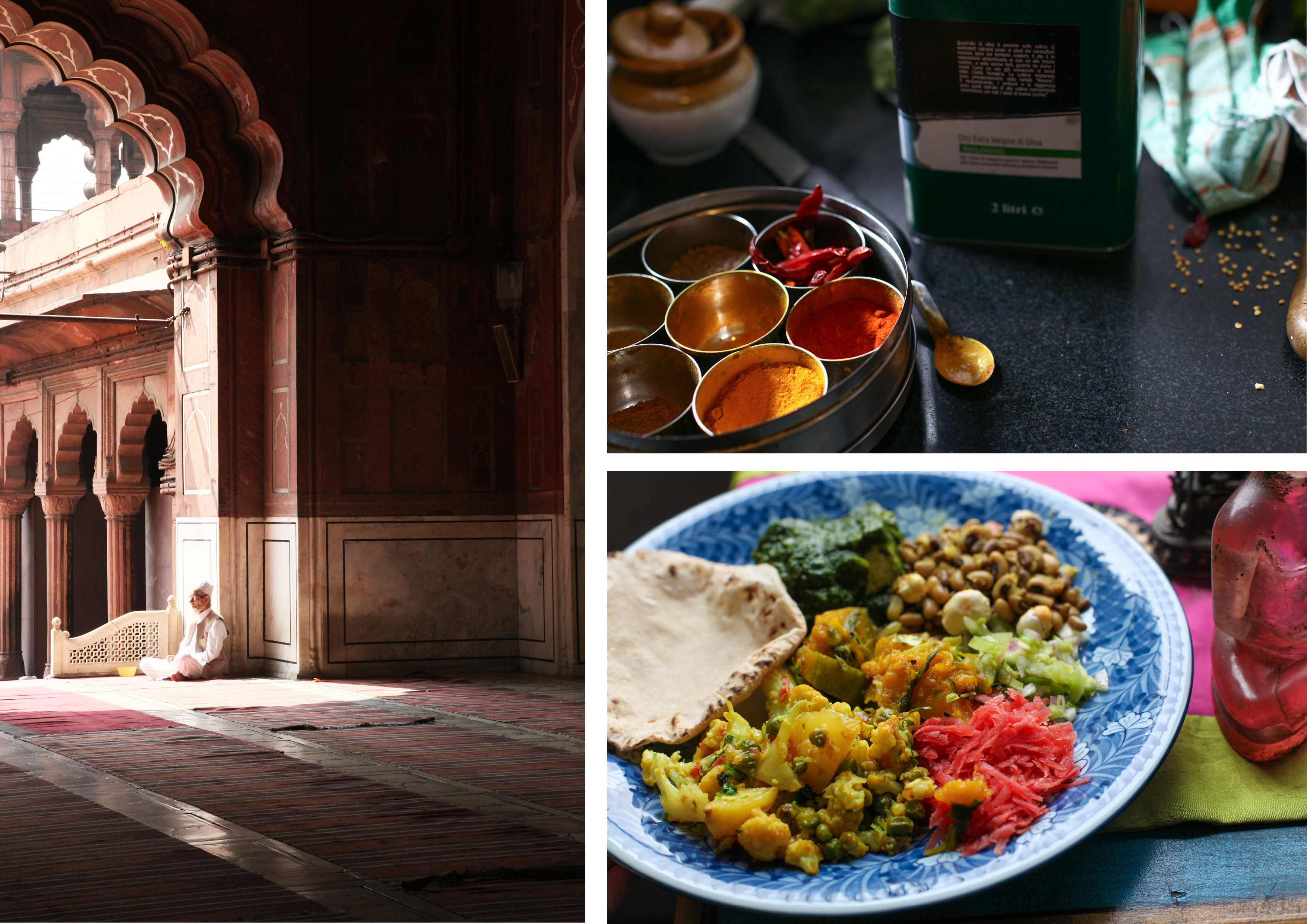 After this brief gastronomic treat, team Jamini headed to Assam, Usha’s birthplace, plunging straight into the Kaziranga National Park, classified as a UNESCO world heritage site and home to the one horned rhinoceros, wild elephants and tigers. Usha was a frequent visitor to this magnificent site, a playground of sorts, during her entire childhood, thanks to her doting grandfather, administrative head of the Assam forest division. The spirit of this jungle, one of the most beautiful natural reserves of India, haunts her imagination even today, and inspired her collection « Evergreen Forest ».

The group of 5 had the rare experience of an encounter with a wild, male elephant that blocked their jeep. An adrenaline filled moment where a forest guard fired shots into the air to scare the animal, but to no avail. The dream team had to turn around and continue on another path. Usha was lucky to spot the great Indian hornbill and share her delight with her guests since this is a bird that she often admired sitting on her veranda of her family home. 2 safaris later, the group had a lovely experience of Assamese hospitality - being invited for tea to their chauffer’s home, where his mother had laid out an array of delicacies. On the drive back to Guwahati, Usha made a stop at the Silghat docks, on the bank of India’s 2nd largest river, the Brahmaputra. This monster of a river that wreaks havoc in the region during the monsoons remains the economic lifeline of the region. Its water irrigates rice fields and tea plantations, and millions of farmers live off the products of the extremely fertile soil in the area. Usha and her guests were lucky to find a vintage boat that gave them a ride on the choppy waters, with a special sighting of river dolphins, a relatively rare occurrence !

On the last day of their trip to Assam, the team visited the atelier that manufactures paper from rhino and elephant poo. Usha’s father, an entrepreneur and social worker committed to preserving Assam’s natural resources, uses raw material from the forest to make 100% natural and handmade paper. The final stop before boarding their flight to Delhi took the adventurers to the hand weaving facility where Usha manufactures her silk scarves and cotton fabric for pillowcases. This is the place where she designs her most popular and successful range of woven motifs, at the same time supporting a micro economy where ancient skills of weaving form the economic backbone for entire populations in surrounding villages. The guests left Assam, in love with the generosity and warmth of her people. They carry with them a hint of the delicatesse and beauty that Usha strives to transmit through her creations.